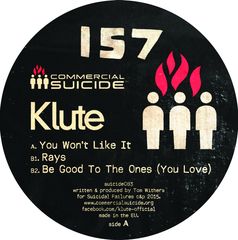 Klute kicks 2015 off with a bang for Commercial Suicide with his first solo 12” outing in many moons.

2015 represents a landmark of 20 years since the release of Klute’s first 12” on Certificate 18 records back in 1995. Be prepared for much more Klute this year

“To mark the occasion i’ve decided to release as much new music as I can throughout the year as singles or EP’s as opposed to my traditional route of saving everything up for an album releases every couple of years. These releases will come on Commercial Suicide as well as other labels….. more news on those will follow.”

There will be a full LP towards the end of 2015, and also a compilation of some of the best Klute stuff towards the middle of the year. Its gonna be a Klute year, basically. And why not?

To order your copy of this release click here