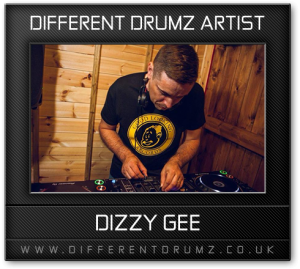 Melvin aka Dizzy Gee is based in Swindon, Wiltshire and has been DJ’ing since 1988. His love for music has been there for as long as he can remember. He was completely hooked on spinning music the moment he seen a good friend cut up two copies of the legendary Planet Rock track for the first time on a pair of SL’s.

Melv spent a lot of time in the early nineties playing within the rave scene and helped spearhead bringing that sound to the local clubs and related events in his hometown. Over the years he’s collected and played Hip Hop, Soul, House, Old Skool, UK Garage and Drum & Bass – the latter being the one he’s been hooked on since the late 90’s. Dizzy’s main influences are LTJ Bukem, Calibre, Duoscience, Atlantic Connection, Phat Playaz, Flowrian, Muwookie, Electrosoul System, Conspire, Okee, Soul Connection, Madcap, AKA, Jrumhand, Blade, Payback….the list goes on.

He has a huge passion for the dnb genre and works hard to blend the music together in a way that’s both soulful and thought provoking. He loves the scene so much he decided to start up a sister label of Criterion Records (Kriterion Recordings) with its Owners Alex’s blessing mid part of 2018. The 8th release is due out soon from the one like Soul Connection. Dizzy Gee is a solid member of the Different Drumz family and has been part of the team for over 3 years contributing with management roles and of course his regular live shows…